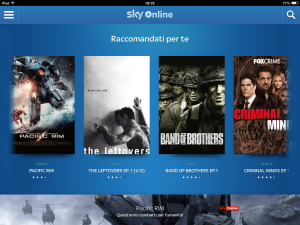 Sky Italia has targeted its subscription-based linear TV and on-demand service at non-Sky customers, particularly younger people. The service does not require a set-top box and is available via the web, iOS and Android devices, and via Xbox and PlayStation game consoles.

ContentWise CEO Paolo Bozzola told DTVE that recommendation is one of the pillars in the design of the service. The company’s recommendation engine is supplied to the pay TV operator via Ericsson, which acted as system integrator for the project.

Sky is offering a selection of live channels via two packages – on covering entertainment and the other covering movies – and on-demand content, including limited-duration passes to sports events.

Bozzola said that recommendation is integrated into all aspects of the UI.

Content can be pushed to subscribers through editorial recommendations as well as presented purely on the basis of past behaviour. ContentWise’s technology also predicts what viewers are likely to want to watch at certains times based on context.

Bozzola said that ContentWise used a mix of techniques, including both past behaviour and metadata, to serve content to customers. He said that based on experience with other service providers, personalization can provide uplift in terms of on-demand consumption of the order of 30%.

ContentWise is not providing the search engine for the Sky Italia service, which is provided to Sky by an existing supplier.