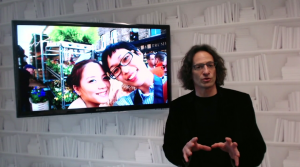 Former BBC iPlayer boss and the co-founder of Beamly, Anthony Rose, has unveiled UTD, a new technology startup he is working on that is designed to “remove the friction in the way that people connect.”

Offering a “sneak peek” of the service via a video posted online, Rose said the app will find people nearby or far away with common interests and connect them “for an experience that could last 60 seconds or could last a lifetime.”

Using machine learning and advanced algorithms, the service is designed to match people with similar tastes, based on their stated interests – for example things that they’ve posted on social networks.

“For us the friction of connecting with other people remains one of the big barriers. Walk into a room, you’re worried: who’s the other person; how do I greet them; what do I say; do we have anything in common? UTD aims to remove the friction from that,” said Rose.

“In the future, the vision is that connecting with Google Glass and with your phone camera – you’ll be in a conference, you’ll be in a party, you’ll be out in the park – hold your phone up to somebody, UTD will recognise them and tell you not just about them, but even bring you ice-breaker lines.”

Rose is working on the project from offices in central London, and has funding and a small team in place, with UTD now recruiting a chief technology officer, a data scientist, two senior iOS engineers and a Node.js developer.

Rose co-founded second screen TV service Zeebox with former EMI executive Ernesto Schmitt back in 2011 and rebranded it to Beamly earlier this year in a change of approach that was designed to “capture the zeitgeist” of Zeebox’s core target audience of 16 to 24 year-old millennials and to break away from its “geeky male audience”.