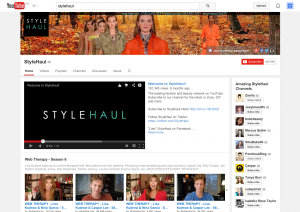 RTL Group has agreed to pay US$107 million (€85 million) to buy a controlling stake in StyleHaul – a multi-channel Youtube network dedicated to fashion, beauty and lifestyle.

The deal increases RTL Group’s shareholding in StyleHaul from 22.3% to 93.6% and values the US-based business at US$151.4 million. It also includes earn-out mechanisms that could increase the initial consideration, subject to the future performance of the business.

RTL has at the same time pledged to invest a further US$20 million in toStyleHaul to fund the company’s growth plans.

“The acquisition of StyleHaul is another major strategic step in developing RTL Group into a global powerhouse in the rapidly growing market for online video,” said RTL Group co-CEOs Anke Schäferkordt and Guillaume de Posch in a joint statement.

“StyleHaul is an excellent fit with our digital portfolio, complementing our recent, technology-focused acquisitions BroadbandTV and SpotXchange. With its strong advertising sales team, impressive track record in producing web content and the synergy potential with RTL Group’s broadcasters and producers, StyleHaul has the ideal foundations for continued strong growth.”

RTL Group made its initial 22.3% investment in StyleHaul in 2013, following a funding round led by Bertelsmann’s digital investment fund BDMI.

Since then, Tiny Riot, the North-American digital studio belonging to RTL Group’s content production arm, FremantleMedia, has made content for StyleHaul. This includes talk show The Crew, which is StyleHaul’s most-watched original series.

“For the past two years the partnership between StyleHaul and RTL Group has played an integral role in our success and growth. We are thrilled to be deepening that relationship and play a significant role in their emergence as a leader in the digital landscape,” said StylHaul founder and CEO, Stephanie Horbaczewski.

Horbaczewski, a former marketing director at Saks Fifth Avenue, founded StyleHaul in 2011 with Allen and Aaron DeBevoise – the team that founded Machinima.

StyleHaul now claims more than 900 million video views per month, and RTL Group said that for the full year 2014 it now expects to more than double its online video views to around 40 billion.

The StyleHaul deal is expected to close by the end of November.