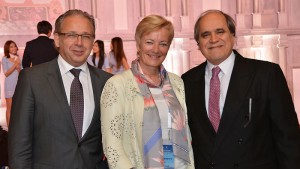 Speaking at the 50th Anniversary Annual Assembly of the ABU this week, EBU Director General Ingrid Deltenre said that DTT remained the “backbone to public TV access” for 250 million Europeans.

“We cannot allow the mobile industry’s insatiable appetite for spectrum resources to highjack this precious resource,” she said.

“Terrestrial broadcasting remains a crucial tool in emergency situations. It is often the only technology which continues to function and can reach a mass audience despite difficult external conditions,” he said.

“Terrestrial television is the cornerstone of the broadcast industry and its survival is essential to the region’s people.”

Both the EBU and ABU have been working to try and illustrate the efficiency of modern DTT networks and the strong demand for DTT services, and argue that spectrum assignments currently reserved for DTT should not change.