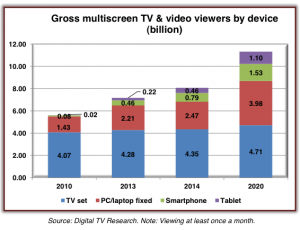 By 2020, the average person will watch TV and video content at least once a month on 2.13 devices, up from 1.14 in 2010, according to Digital TV Research’s Multiscreen TV & Video Forecasts report.

According to the report global gross multiscreen viewers – with one individual watching video on two devices defined as two ‘viewers’ – will reach 11.32 billion by 2020, up from 5.6 billion in 2010.