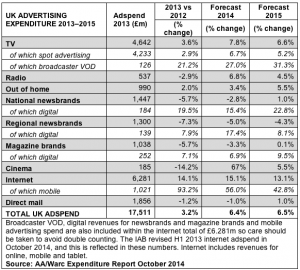 UK advertising expenditure grew at its fastest rate for three years in the first half of 2014, according to figures released by advertising trade body the Advertising Association/WARC.

Growth was particularly strong in the second quarter, which saw significant increases across TV, radio and the internet, leading to a total of £5.515 billion for the quarter, according to AA/WARC. Over the first six months taken together, ad spend grew by 6.3% year-on-year, leading the trade body to make an upward revision to its full-year forecasts to 6.4%.

The AA/WARC expects the overall ad market to soften next year, turning in growth of 6.5%, down slightly on earlier expectations. TV ad growth is expected to amount to 6.6%.

“Growth at twice the rate of UK GDP is quite a headline, but the real story is of digital and creative leadership in e-commerce.  As the Eurozone wobbles, it’s a reminder that our consumer economy is central to the UK’s economic narrative,” said Tim Lefroy, CEO of the Advertising Association.