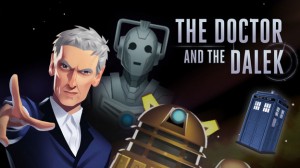 The Doctor and the Dalek

The BBC has launched a Doctor Who-themed online game, aimed at viewers of its children’s channel CBBC.

The Doctor and the Dalek is based around a stand-alone story from Doctor Who and Wizards vs Aliens TV writer, Phil Ford, and is voiced by current Doctor Who actor Peter Capaldi.

The free game launches on Wednesday through the CBBC site as part of the BBC’s ‘Make it Digital’ initiative, which is designed to inspire a new generation of children to get creative with coding, digital technology and programming.

The Doctor and the Dalek includes a number of puzzles that are featured throughout the game, where players must take control of the Dalek and program it to perform a range of tasks, such as flying.

BBC director of television, Danny Cohen described the game as “an excellent example of how a hugely popular BBC show can give fans something extra, whilst also introducing wider audiences to increasingly important skills, such as coding and programming.”

Sinéad Rocks, head of BBC Learning added that The Doctor and the Dalek is not only an entertaining game, but also “a great introduction to some key principles of computer programming.”

The Doctor and the Dalek was commissioned by BBC Learning, developed and produced by BBC Wales and Somethin’ Else in association with BBC Future Media.

Tags: BBC, CBBC, Doctor Who, online game, The Doctor and the Dalek