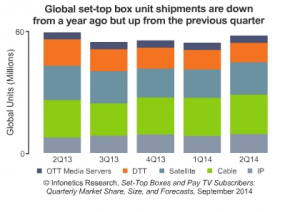 The global set-top box (STB) market saw revenues climb 4% quarter-over-quarter to reach US$4.8 billion in Q2, according to new stats by Infonetics Research.

In its Set-Top Boxes and Pay TV Subscribers report, Infonetics described “mixed signals” in the market, with STB unit shipments up 7% sequentially in Q2, but down 3% compared to Q2 2013.

In this year, satellite STBs are also expected to contribute the majority of STB revenue at 36%.