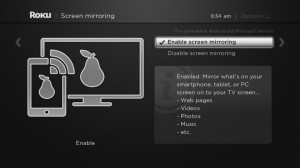 Roku is introducing device mirroring on its set-top boxes and HDMI dongles, enabling users to cast content visible on other screens direct to their main TVs for the first time.

The move follows the success of Google’s Chromecast, which offers this functionality, and the launch of other HDMI devices that offer ‘mirroring’ capability – notably Microsoft’s Miracast-enabled Wireless Display Adapter and the Mozilla-supported, Firefox OS-based Matchstick.

Roku’s mirroring feature is currently in beta for selected Android and Windows 8.1 devices, and will be made available across Roku 3 and Roku Streaming Stick devices within a matter of weeks.

Roku devices will be able to mirror devices based on Android 4.4.2 or above, and Windows 8 and Windows Phone 8 screens.

Users will be able to select the screen mirroring option from the settings menu on their Roku player.

Roku has sold over 10 million streaming media devices to date and this week received an additional investment injection from BSkyB, which uses Roku-based boxes to deliver its Now TV OTT TV service. Roku boxes and streaming sticks have not until now offered mirroring, delivering instead an internet-delivered set-top-box-like experience via a range of TV apps.