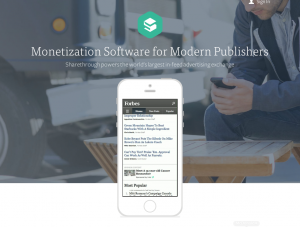 Sky has invested US$5 million (€4 million) in US advertising technology firm Sharethrough, as part of its plan to innovate by partnering with emerging tech companies.

The investment forms part of a US$10 million round of funding raised by Sharethrough, a ‘native advertising’ firm that lets publishers monetise sites and apps with ads that are non-interruptive and stylistically similar to the surrounding content.

Sky first partnered with Sharethrough last year, working with the firm to offer native advertising on its Sky Sports website.

“This new partnership continues the work we’re doing to harness exciting technological developments and integrate them into our business. We’re pleased to be deepening our relationship with Sharethrough and look forward to building new links with other startups and tech entrepreneurs in the US and Europe,” said Sky’s director of business development, Emma Lloyd.

Under the terms of the deal, Sky Media’s deputy managing director, Jamie West, will take a board observer position at Sharethrough. The other contributors to the US$10 million investment round included existing Sharethrough investors such as Floodgate, Elevation Partners, North Bridge Venture Partners, and Silver Creek Ventures.