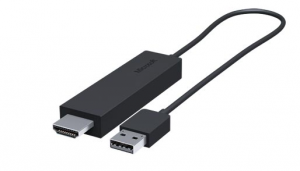 The HDMI dongle will mirror whatever is displayed on a computer or other device onto a TV screen, enabling users to share whatever is on tablets, laptops or smartphones on an HDTV screen.

The device can work wirelessly, but doesn’t require a WiFi connection, enabling it to be used more easily for business applications such as displaying a presentation on a bigger screen. Microsoft highlighted this application in its data sheet for the product, pointing out that it could be plugged in to a conference room projector or monitor.

Miracast is a wireless screen-cast standard supported by the WiFi Alliance, also supported by Google, that is  used by Microsoft on its Windows Phone 8 platform. News of Microsoft’s plans first came to light last month when it emerged that the group had secure WiFi Alliance certification for its dongle.

The dongle will enable users to mirror the displays of Miracast-enabled Android phones and tablets, – namely Android devices using version 4.2.1 or higher – though not iOS devices. Microsoft has highlighted its ability to work with its own Surface tablets.

The Display Adapter will go on sale in the US and Canada at the end of October. No further international rollout plans have been revealed.