More than one billion Facebook video views a day 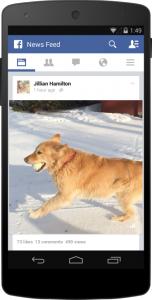 Since June of this year, there has been an average of more than 1 billion video views on Facebook each day, with more than 65% of video views coming from mobile devices.

Growth in video views exceeded 50% from May through July of this year, according to Facebook stats, with the site this week announcing that it will start publishing how many views public videos on Facebook receive to help people discover popular clips.

Speaking at the RTS conference in London yesterday, Facebook’s head of strategic media partnerships for EMEA, Karla Geci, said access points to TV and video was “changing for the better.”

“We look at behaviour on Facebook and the average person is checking in on Facebook about 14 times a day… Why aren’t we seeing this as an opportunity to reach this elusive demographic,” asked Geci.

“It’s just being open to redefining what broadcast content is and how to reach that demographic through various access points.”

Speaking on the same panel discussion, Google’s president of business operations for Northern and Central Europe, Matt Brittin also revealed that “something like 60%” of YouTube original content is viewed outside the country it was made in.

“You break out of the linear TV schedule and you’ve got all of time and space available. You can have your content viewed by anybody around the world when they want it. That is a massive opportunity,” said Brittin.