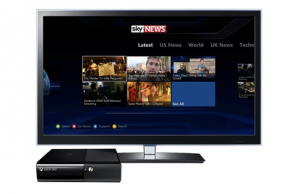 Sky is set to launch Sky News on Xbox 360 games consoles in the UK and US, extending the channel’s reach in the states and giving domestic customers a new way of accessing the station.

From tomorrow, Xbox Live customers on Xbox 360 will see the Sky News icon on the TV section of their homepage, giving them access to the network’s live feed and a range of continually updated on-demand stories.

Sky News is already available on Apple TV and Roku boxes in the US and Sky said it is building on its growth in this market by also tailoring its channel feed for the US, incorporating editorial segments produced specifically for this audience.

“Sky News is consistently exploring opportunities to expand our global reach. Making Sky News available on Xbox was an ideal way to achieve this. With a growing US footprint of a million users and a US news team, we’re thrilled that our coverage will be showcased to millions of Xbox customers,” said head of Sky News Digital, Andrew Hawken.

The Sky News Xbox app was developed by Sky in partnership with 1 Mainstream, which specialises in distributing video services across TV, games console, tablet and streaming devices. Sky has worked with 1 Mainstream since 2013 and also invested in the Silicon Valley-based start-up.