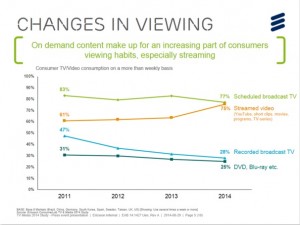 Streaming habits are “closing in on linear TV” consumption, with the proportion of streamed video consumption now almost on a par with scheduled broadcast TV, according to a new global study by Ericsson.

The 2014 ConsumerLab report on TV and media trends found that 75% of consumers watched streamed video – including YouTube clips, TV shows and movies – a more than weekly basis, up substantially from 61% in 2011.

Discussing the findings, Niklas Heyman Rönnblom, a senior advisor at Ericsson ConsumerLab, said that he does not believe that scheduled broadcast will “go away”

“When we talk scheduled broadcast TV here, we have to divide it into two different points of content – live TV and non-live TV. When we see this decrease in linear scheduled TV, I would argue that it’s non-live TV, like TV series, movies and so-on that are migrating to new ways of watching TV.”

At the same time, Ericsson found that there was also a major decline in the consumption of recorded broadcast TV on devices like DVRs. The proportion of consumers doing this dropped from 47% in 2011 to 28% in 2014.

Similarly DVD and Blu-ray viewing dropped from 31% to 25% of viewers over the same time period.

“The main reason for that is convenience. A lot of consumers are shifting those habits to new ways of watching TV and video, like streaming, because you don’t have to plan ahead, you don’t have to record and you can access your content through any device – not only the one that’s connected to your DVR,” said Rönnblom.

He added: “By the end of 2020 we will see that consumers consume as much on-demand content as they do linear content.”