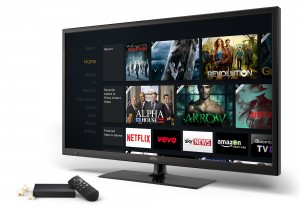 Amazon is launching its web streaming set-top box Amazon Fire TV in Europe for the first time, rolling it in the UK and Germany.

Customers in both countries will be able to order the device now, with boxes to start shipping in Germany on September 25 and in the UK on October 23.

In the UK, the streaming box, which first launched in the US in April, will give access to content from the likes of Amazon Prime Instant Video, Netflix, Channel 5’s Demand 5, Sky News, Curzon Home Cinema, YouTube and music streaming service Spotify.

In Germany, Amazon said customers will be able to use Fire TV to access the media libraries of ARD and ZDF, as well as services like German VoD provider Maxdome.

Fire TV streams in up to full-HD 1080p, has voice search with a built-in microphone in the remote control and also lets users play games such as Minecraft, NBA 2K14, and The Walking Dead.

Amazon claims the device’s quad-core processor gives it three times the processing power of Apple TV, and its 2GB of memory means that it has four times the memory of Apple TV or Google’s Chromecast.