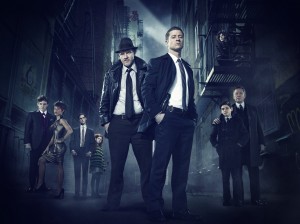 In what is being described as an “unprecedented” deal, the move represents the first time Netflix has taken first-run rights on a major network series before it has had its linear launch. Amazon has taken a similar approach on CBS miniseries such as Under the Dome and Extant.

The deal gives Netflix subscribers in all territories it operates in access to each episode of the Batman prequel from 2015 following its linear launch in the respective territories. In the US, it debuts on Fox on September 22, while Channel 5 has it in the UK, WarnerTV bought it for Asian pay TV, Nine Network has an Australian deal and CTV in Canada is the local broadcaster there.

For Warner Bros., the deal is distinctive as it normally sells streaming rights by single territories, not as multi-territory pacts.

Studio sources indicate the deal has been the works for a number of weeks. Some say the price tag, rumoured to be more than US$1.5 million an episode, was a factor in the decision to sell UK linear rights to Channel 5 for around £500,000 (€630,000) per episode.

Netflix struck the agreement with Warner Bros. Worldwide Television Distribution, whose president Jeffrey Schlesinger said: “In this era of new business models and expanding windows, this is an unprecedented deal for our company and our industry. While we typically license our programming country by country, we have licensed this very special series to Netflix on a multi-territory basis.

“Netflix is a perfect home for Gotham following its initial broadcast in each respective country, giving Netflix subscribers the opportunity to catch-up prior to the new season, whether they’re already fans or discovering it for the first time.”

“Gotham is the most anticipated new series of the fall season and we are thrilled to offer it to our members around the world,” said Ted Sarandos, chief content officer at Netflix.

“The Batman origin story is sure to have massive global appeal so it is fitting that, along with Warner Television, we have created a new model for distributing a show that international and domestic audiences will love.”

The news comes soon after Netflix spent what was reported as a record US$2 million per episode to acquire the biggest show of last broadcast season, the Sony-distributed Blacklist.

Gotham tells the story of a young Detective James Gordon (Ben McKenzie), who later goes on to become police commissioner and a key role to Batman canon.