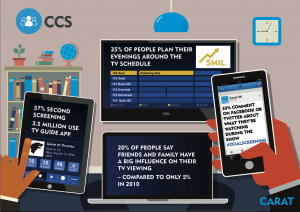 TV viewers are starting to “shift back” towards linear TV schedules thanks to social media, in spite of the convenience of video-on-demand services, according to a new study by global media agency Carat.

Carat’s consumer research and insight tool, CCS, which surveys 11,000 British consumers, found that 35% of people now “actively plan their evenings around the TV schedule” – 5 million people more than four years ago when TV on-demand began to take off.

“This behavioural change is being fuelled by social media use and the viewers’ enjoyment of discussing the latest appointment-to-view TV shows, such as Breaking Bad, while the show is airing – not in the week afterwards,” said the Carat study.

The research claims that social media has transformed how people choose what to watch TV, with 57% of people “second screening in some way” while watching linear TV, and 33% commenting on Facebook or Twitter about what they’re watching during the show.

Roughly 20% of people also said that their friends and family have had a big influence on their TV viewing, compared to only 5% in 2010.

“The mix of appointment to view programming and social media means that people are moving from passive to active viewing,” said Steven Ballinger, Carat’s head of media investment

“Being part of the conversation during the latest battle in Game of Thrones or a terrible audition in Britain’s Got Talent with friends and strangers hugely enhances the experience for the consumer.”

“This drives huge opportunities for advertisers. It turns their advertising from a monologue to a dialogue. Using second screen apps such as AdSync or Shazam, which allows the user to access more content, creates more dwell time for consumers with the brand.”