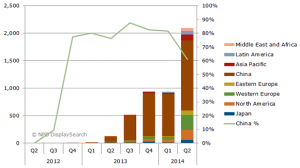 Global shipments of 4K Ultra High Definition (UHD) TV sets reached 2.1 million in the second quarter of 2014 – more than the number shipped during all of 2013, according to NPD DisplaySearch.

According to the research the Q2 figure compared to 1.6 million shipments for full-year 2013, following the introduction of new 4K TV models from global brands in every region this year and an increase in 4K content from streaming providers.

NPD said that this introduction of new models around the world, with a focus on 4K as a “must have” in high-end sets, has shifted the shipment balance.

Last year, NPD said China accounted for roughly 80% of shipments in each quarter, as Chinese brands introduced low-priced 4K TVs. However, this has now dipped to 60% thanks to a greater regional shift.

“New 4K TV model introductions have broadened the 4K TV business, which has become a lot like the high-end TV market, in general,” said Paul Gray, director of European research for NPD DisplaySearch.

“Even so, there needs to be greater implementation of broadcast offerings that deepen the value of 4K sets, beyond pixel counts.”