Samsung to expand Ultra HD offering with Netflix and Amazon 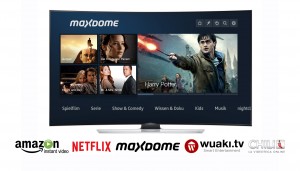 In an announcement ahead of electronics trade show IFA next month, Samsung said it plans to launch Amazon’s UHD VOD service globally in October, and has also expanded Netflix’s UHD VOD Service into Europe after launching it in March across the US and other countries.

It also said it would reinforce its partnerships with major European content providers, including VOD service Maxdome and TV and film streaming services Wuaki.tv, and CHILI, in order to secure more UHD content.

“The popularity of UHD content is really starting to grow. Key to maintaining this and giving consumers what they want is wide variety and choices that reflect their bespoke interests. We are pleased to expand the array of UHD content that our consumers can enjoy on our ultra-immersive Curved UHD TVs,” said Robert King, vice president of consumer electronics for Samsung UK & Ireland.

Samsung has already made of number of UHD moves, including launching a 500 gigabyte UHD Video Pack in July in partnership with 20th Century Fox and Paramount.

In May Samsung also partnered with the Vienna State Opera to provide UHD live streaming of Nabucco with Placido Domingo, one of The Three Tenors, through the Vienna Opera App.