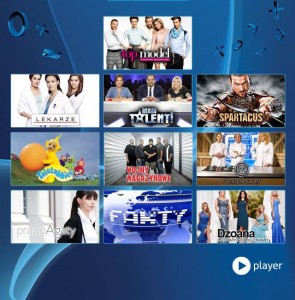 TVN claims that the app, which went live this week, marks the first Polish multimedia service to go live on the PS4.

TVN, which rebranded its online video service from TVNplayer.pl to Player.pl earlier this year, now offers TVN shows as well as other content such as children’s programmes and American TV series like Spartacus and Magic City.

“The PlayStation 4 release in Poland has aroused immense interest, therefore we are delighted to have the opportunity to introduce Player.pl to PS4 system as the first Polish multimedia service on our consoles in Poland,” said Stefan Nabiałczyk, senior product manager of Sony Computer Entertainment Polska.

Maciej Maciejowski, member of the management board in charge of new business development at TVN added: “As the number of people watching us outside personal computers, i.e. on mobile devices, smart TVs or gaming consoles, is growing dynamically, we definitely could not miss next-generation Sony consoles.”