Netflix international base expected to account for fifth of total 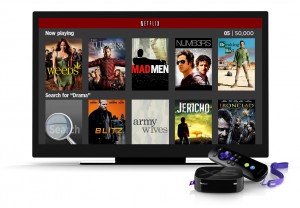 Netflix is likely to see international subscription account for one fifth of its overall business in four years time, up from 10% today, as it completes its planned raft of launches in European countries, according to a study by IHS Technology.

IHS estimates that Netflix’s launch in Belgium, France, Luxembourg, Austria, Switzerland and Germany later this year will add five to six million new subscribers to Netflix’s total. Together with expansion of its base in existing markets including the UK, Ireland, Netherlands and Scandinavia, IHS estimates that Netflix will add eight million new European subscribers by 2018.

IHS also predicts that the Netflix rollout will take western Europe’s online subscription market to a growth rate of 35% a year on average between now and 2018.

Richard Broughton, director of broadband analysis at IHS Technology, said that extensive – and expensive – marketing has been the key to Netflix’s success in pushing original content such as House of Cards and Orange is the New Black, citing the US$57 million the company spent on marketing in the fourth quarter of 2013.

“Taking the likely churn rate into account, this cost is paid off in a little over half a year of a paid streaming subscription,” Broughton said. ”Furthermore, global peak search volumes for the latest season of Orange is the New Black were roughly four times higher than those for the first season, with a similar uplift for the second season of House of Cards.”

IHS’s study came as RTL Group co-CEO Guillaume de Posch said that Netflix’s arrival in the German-speaking market is likely to lead to a “price war” between it and established pay TV players.

Speaking to Reuters as the company reported solid German-region results for the first half, De Posch cited Sky Deutschland’s cutting of the price of its Snap by Sky offering as a sign of things to come. De Posch said he believed Netflix’s launch would make life tough for pay TV operators in the German-speaking region. However, he said he did not expect Netflix’s launch to have a significant impact on RTL’s own business, which remains largely advertising-driven.