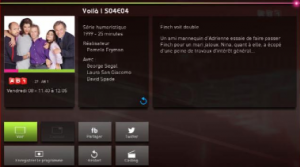 The new LaBox TV app, which will launch on September 1, will allow subscribers to view all content and services available via its advanced LaBox Fibre platform on iOS and Android smartphones and tablets, both inside and outside the home.

According to Numericable the service, with 320 channels available on multiple screens, will be the “best application on the market” with the biggest catalogue of content available in France.

LaBox TV will allow users to control their TV service from their tablet as well as continuing to view content on the main screen in another room. It will allow several programmes to be watched simultaneously, allowing tablet users to view recordings, catch-up programmes or VoD titles while another viewers watches something else on the TV. Other features include the ability to set remote recordings.

Numericable is also extending its Restart service, which allows viewers to view currently aired programmes from the start, adding digital-terrestrial channels receivable via its set-top and extending the existing service to a further 27 channels, including sports, movies, kids channel Gulli from Lagardère Group, documentary and drama channels, taking the total available to 38. The Restart service was initially launched in January.

Numericable has also introduced automatic pairing of LaBox Fibre with the YouTube mobile app, enabling users to select YouTube content on their smartphones and view it on the main screen.