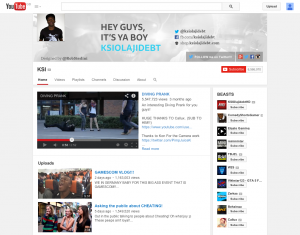 The UK arm of digital company Endemol Beyond has partnered with online gamer Olatunji (aka KSI) to launch a sports-themed YouTube channel.

Rule’m Sports will follow KSI over a year as he attempts to master five sporting disciplines.

This will comprise more than 150 pieces of content and feature sport stars such as boxer Amir Khan, heptathlete Louise Hazel and rugby player James Haskell.

Endemol Beyond said KSI’s “journey from gamer to sportsman on RULE’M SPORTS [would] be hilarious, riotous and inspirational”.

The gamer has built an audience of more than 8.5 million subscribers since uploading his first YouTube video in 2010. Overall, he has amassed more than 1.28 billion views.

“The guys at Endemol Beyond said I was going to have loads of fun, but so far I’ve been knocked about by pro boxers and made to look crazy slow by some top athletes,” he said. “Now they’re lining up some absolutely huge rugby guy for next season, and I’m starting to realise just what I’ve let myself in for.”

“Creating unmissable content with the hottest stars of the digital video world is what Endemol Beyond is all about,” said Endemol Beyond UK’s director Randel Bryan. “Not only is KSI one of the biggest YouTubers out there, he’s also one of the most entertaining, making him the perfect host for this truly unique digital sports channel.”

Endemol Beyond is the premium multichannel arm of production and distribution giant Endemol that launched last year with a war chest of more than €30 million.

The division was recently subject to criticism from producer distributor Beyond over its branding. Endemol told DTVE sister title TBI in May it was keen to resolve the issue following strong words from beyond CEO Mikael Borglund.

Endemol Beyond has channels with the likes of rapper Pitbull and The Sopranos actress Drea de Matteo. It scores around 290 million monthly views. It has hubs in the US, UK, Germany, Spain, Italy and France, and is expanding into Asia, eastern Europe and Latin America.