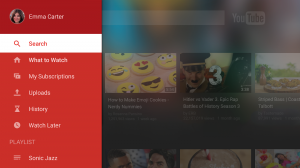 YouTube is updating its app for TV, with Microsoft’s Xbox One game console receiving the new version first. Separately, alternative video sharing site Vimeo has updated its app for the Roku platform, with plans to introduce in-app premium services.

The Google-owned video sharing site has already launched the Xbox One update and the new version of the app will be rolled out to other streaming devices over the coming weeks.

The new version of the TV app features a guide on the left hand side that is in line with the guide already available on computers, phones and tablets.

Users signing in will be able to access videos from their subscriptions and recommendations in the What to Watch section, or turn on a playlist they have created or saved. The update also features channel pages that are populated with new playlists from YouTube content creators.

Separately, video sharing site Vimeo has redesigned its app for the Roku streaming device platform, including preparing for the launch of in-app purchases of premium content.

The new version of the Vimeo app for Roku includes additional discovery features and an improved search capability. The app has also been set up to provide support for in-app purchasing via the Vimeo On Demand service. Vimeo plans to allow content creators to charge for access to their content direct from Roku, with this set to launch in the autumn.

Other features include the ability for unregistered users to watch content picked by Vimeo staff and curated collections without the need to create an account. Users will also receive automatic video recommendations while searching for content. The app also features in interactive playbar that Vimeo says allows users to ‘like’ videos, add them to a Watch Later queue and check out videos from the same content creator.

According to Vimeo, this is the first major revamp of its app since it was first released three years ago.