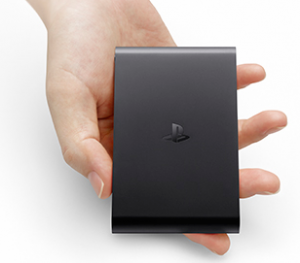 Sony has announced that it will launch its new PlayStation TV streaming media device in Europe in November, following its US launch in October, while rival game console provider Microsoft has introduced a raft of new TV features for the Xbox One, in addition to a range of new social features for the platform.

Sony’s PlayStation TV – the company’s move to provide a device that will rival Apple TV and Roku while offering access to PlayStation games – will be available in the US from October 14, with a European launch to follow on November 14. The service will cost €99 in Europe, and £85 (€107) in the UK.

The device will enable users to stream games from their PlayStation 4 consoles to it, allowing users to play games in other rooms in their homes without moving the main console.

Key to the Xbox One platform will be a new TV app that will enable users to play media files from either an attached USB device or from a network connected home media server that supports the DLNA standard.

A preview version of the new media player app will initially support USB devices only, but DLNA support will be added “soon”, according to Microsoft.

Unlike the older Xbox 360 console, Xbox One will also support the MPEG-2 TS format, as well as animated Gifs and MKV files, support for which will be added by the end of this year.

Microsoft is also complementing its recent launch of a new digital TV tuner for Xbox One in the US and Europe with the ability to stream TV services across home networks to smartphones and tablets using the Xbox SmartGlass app. Users will also be able to pause, play and rewind as well as change channels, without interrupting gameplay on the Xbox One, on Windows, iOS and Android devices.

Other TV features for the platform include a live TV mini guide in markets where the Xbox OneGuide is currently available. This displays details about TV content currently playing at the bottom of the Xbox screen, enabling viewers to change channels and see what’s on other channels.

Microsoft has also said it will launch Xbox One in 29 new markets over the coming weeks.

Sony and Microsoft are both present at the Gamescom trade fair in Cologne this week.