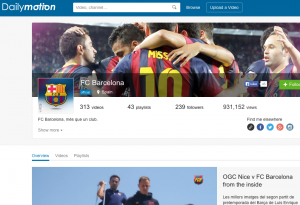 During the forthcoming season several hundreds of videos and live streams will be uploaded monthly by FC Barcelona, including press conferences, player interviews and other events.

Dailymotion will also carry footage from FC Barcelona’s futsal (five a side), handball and basketball teams.

“The global popularity of FC Barcelona is obvious through its social media following, which easily outstrips any other football club with more 75 million followers on Facebook and Twitter,” said Marc Eychenne, VP of International Content at Dailymotion.

“By working in agreement with Dailymotion, FC Barcelona will be able to build on this to further enhance its video strategy and deliver an enhanced programme that includes livestreams, pay per view, SVOD and more on their website. The agreement builds on the great results that Dailymotion has achieved with other leading football clubs, leagues and federations – and underlines how the Dailymotion player is the video technology solution that the world’s leading sports brands trust to deliver.”