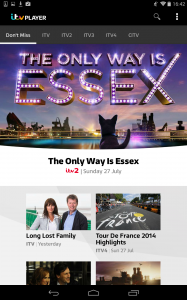 As well as offering 30 days of catch-up programming from ITV, ITV2, ITV3, ITV4 and CITV, the app now provides the ability to watch ITV channels live on the move on Android devices.

According to ITV, the Android app also features a new user interface that dynamically scales to a range of screen sizes and has an improved playback experience on Android devices.

“An incredible 14 million people have downloaded the ITV Player app and we are seeing large audiences using their tablets and mobile phones to watch live TV as well as catching up on their favourite shows,” said Paul Kanareck, director of online and brands at ITV.

“We are delighted to offer the Android user base a significantly upgraded ITV experience. Mobile is central to our online plans, including the recent launch of our new service on Windows 8 and joining the Sky Go platform, and we look forward to further activity to come.”