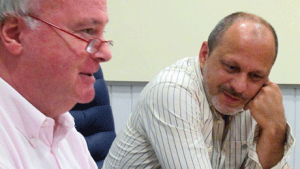 The European Broadcasting Union (EBU) partnership programme has created a taskforce to help Ukraine manage the merger of state national TV and radio companies into a single public service broadcaster.

Senior EBU consultant and former vice-president Boris Bergant and head of member relations David Lewis have addressed a workshop in Kyiv, with the support of the Council of Europe and at the invitation of Zurab Alasania, director general of National Television of Ukraine (NTU), addressing 20 key staff from NTU, radio company RCU, national state and radio company Kultura and UkrTeleFilm Studio.

According to the EBU, Bergant outlined essential steps in developing a strategic plan for the new broadcaster including the definition of a vision and mission, strategic goals, programme and functional strategies and internal organisation, while Lewis made a presentation on the EBU and core public service values.

The four organisations are set to be merged, along with 25 regional state broadcasters as the Public Service Broadcaster of Ukraine (PSBU) by the beginning of next year. The move follows the adoption of a new media law in April.

The regional broadcasters currently have no links to the national TV and radio organisations. Bergant and Lewis visited the regional state broadcaster in Zhytomyr county, which has 231 staff headed by director general Vasyl Golovetskyi, as part of its programme of assistance. NTU and NRCU are currently members of the EBU.