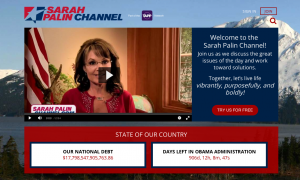 The Sarah Palin Channel launched yesterday on the Tapp platform and promises to “unprecedented access to and interaction with Governor Palin.”

The US$9.95 per-month channel will offer Palin’s commentary on “important issues facing the nation” as well as a behind-the-scenes look into Palin’s “personal life as a mother, grandmother, wife and neighbour.” Palin will executive edit the channel and oversee all posted content.

Tapp launched earlier this year and was co-founded Jeff Gaspin, former chairman of NBC Universal Television, and Jon Klein, former president of CNN in the US. The firm offers “niche channels,” designed to connect personalities with their “super-fans.”

Sarah Palin held office as governor of Alaska between 2006 and 2009. She was named the Republican party’s vice presidential candidate in August 2008, running alongside presidential hopeful John McCain.

The pair lost the 2008 election in November to Barack Obama and running mate Joe Biden.