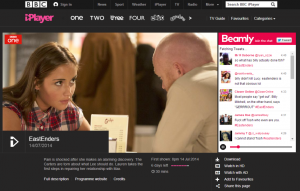 Beamly, the service that was recently rebranded from Zeebox, has launched a new Chrome extension that displays Tweets as part of the UK’s leading catch-up services.

The Beamly OnDemand extension adds a social panel to the BBC iPlayer, ITV Player and Channel 4’s 4oD on-demand services, displaying tweets and comments that were made about a show at that moment it first broadcast on TV.

“Beamly OnDemand finally makes catch-up social – you get to watch whenever you want, and you still get the social commentary made at that moment in the original airing of the show,” said Beamly.

Future updates of Beamly OnDemand may also include support for additional broadcasters and US and Australia video on demand sites, the firm added.

The free extension, which is available now in the Chrome Web Store, was developed at a London hackathon event earlier this year by developers Guy Nesher and Dan Wong, who won a £2,500 (€3,164) Beamly prize.