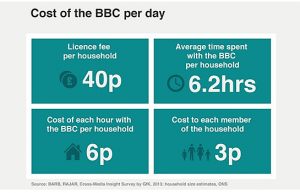 The BBC’s director of policy James Heath has spoken out in favour of the public service broadcaster’s licence fee model, claiming that “subscription isn’t the best way to fund the BBC.”

Writing two blog posts ahead of the forthcoming review of the BBC’s Charter, Heath argued that a subscription model would “unavoidably change the nature of the BBC and the UK’s successful broadcasting ecology.”

“The argument I want to make is that subscription is not the answer as long as you want the BBC to be a universal, public service broadcaster that aims to surprise and inspire each and every one of us and to deliver social and cultural benefits at scale,” he said.

Heath argues that based on previous research, the BBC would have to pay £20 (€25.30) per-month should it switch to a subscription model, roughly 65% more expensive than the current licence fee, making the BBC “much less affordable”.

He also argued that the technical implications of moving away from the license fee would create major challenges and prove costly.

“While pay-TV users have set top boxes or other equipment with ‘conditional access modules’ (CAM) that enable subscription, pay TV equipment is only in just over 50% of households. Around 11.5m households have free-to-air TV alone, while a total of almost 20m households have at least one ‘free’ TV set. This equipment would have to be fitted with CAMs or replaced, at an estimated cost of around £500 million.”

He also said that the BBC calculated that it would lose more than £150 million per year from putting BBC Three, BBC Four, BBC Online plus BBC iPlayer behind a pay-wall.

Arguing in favour of the licence fee, Heath said that the BBC performs well because of the fee and enables the corporation to be an independent, universal broadcaster.

“Changing media consumption is a reason for future-proofing the licence fee so that it applies to on-demand use of BBC TV programmes, but not a justification for scrapping it,” said Heath.