EU has more than 3,000 on-demand services 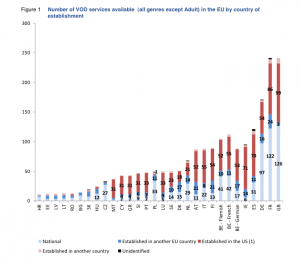 Graph by the European Audiovisual Observatory

As of February 2014 there were 3,088 on-demand services in the European Union, according to new research by the European Audiovisual Observatory.

Among the audiovisual services counted were 1,104 catch-up TV services, 711 branded channels of broadcasters on open platforms and 409 VoD film services.

The ‘On-Demand Audiovisual Markets in the European Union’ report found the UK to have the most established services at 682, followed by France with 434 services and Germany with 330 services.

There were also 223 services based in the US but targeting European countries.

“This analysis highlights the importance of cross-border and international circulation of on-demand audiovisual services,” according to the report.

“Around 60% of the VoD services available in individual EU Member States are established in one other country. This illustrates the reality of the pan-European circulation of on-demand audiovisual media services through the EU.”

The study said that in the EU, the majority of parent companies that own VoD service providers are teleco operators – like Orange, Deutsche Telekom, Telefónica and Vodafone – or established media firms like Bonnier Group, the BBC and ProSiebenSat.1.

By comparison, the report claimed that most US-incorporated parent companies owning

VoD service providers in the EU are media groups like the Walt Disney Company or 21st Century Fox, already established in the European audiovisual landscape such as pay-TV or TV channels, or are pure OTT players like Netflix, Amazon or Google – for which audiovisual services are often not their core business.