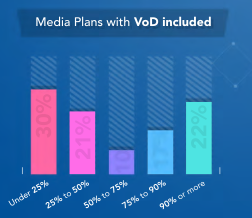 Over half of UK media buyers plan to increase their spending on video-on-demand advertising by at least 25% this year, according to research carried out by Collective.

Fifty-six per cent of survey respondents said that they were responsible for both digital and VoD spend, with 39% saying the bought TV and VoD.

Thirty-nine per cent of respondents said VoD features on 75% or more of their campaigns, with a quarter of buyers saying they included it on over 90% of their plans.

According to the survey, 60% of buyers are placing over half of their VoD campaigns on non-bradcast sites, emphasizing the growing importance of short-form video to deliver incremental reach, according to Collective.

Fifty-two per cent said that video now appears on more than half of their campaigns.