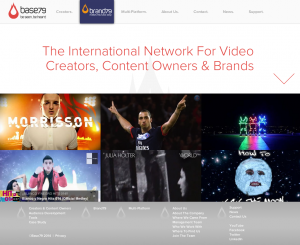 UK-based multichannel operator Rightster has acquired rival network Base79 in a deal that could be worth £50 million (€63 million).

At the same time, YouTube co-founder and former CEO Chad Hurley will join the Rightster advisory committee as the company positions for growth. Patrick Walker, the former senior director of YouTube EMEA who joined Base79 last year, will join Rightster’s executive team as CCO. Hurley, meanwhile, will offer advice to the growing firm.

Furthermore, Rightster is also paying up to £4.1 million to buy social video company Viral Spiral, which is formally known as Viral Management Ltd and best known for representing viral video Charlie Bit My Finger. Rightster already owns 25% of the firm after a £500,000 investment in October 2012.

The deals will make Rightster the fourth-largest YouTube channel operator in North America and the largest outside of the US. It will grow from 371 million views a month to 1.1 billion, add more than 2,000 channels and double its subscriber base.

Rightster last year joined the AIM market and made net revenue of £6.2 million in 2013.

Base79 was founded by Ashley Mackenzie and Richard Mansell as My Video Rights in 2007. It rebranded to its current moniker in 2011, and is now the largest YouTube channel operator outside of North America with approximately 760 million monthly views across 1,100 content providers such as music network SBTV and Reuters.

Rightster, itself the largest online video network in the UK, will pay £25 million plus net cash and working capital adjustment in cash on closing for Base79, and a maximum of another £25 million in new Rightster shares in depending on earn out conditions being hit by April 30 2015.

Rightster is placing 75 million shares at 56p per share in order to raise £42 million to part-fund the deals.

The firm’s directors said the “the Base79 acquisition, together with the VML acquisition, will create a scalable digital distribution solution for content creators and brand owners globally and support the company’s path to profitability”.

“Acquiring Base79 and Viral Spiral is transformational for Rightster,” said Rightster founder and CEO Charlie Muirhead. “Importantly, this greater scale and expertise improves the service we will be able to offer creators and publishers, improving our ability to both grow audiences and increase monetisation and positions us as a global leader in the exploding online video market for brands and media agencies.”

Muirhead founded Rightster in 2011, and the group currently employs 183 staff in 10 offices across 10 territories.