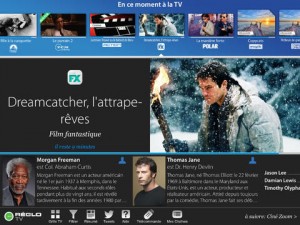 Ahead of Netflix’s planned launch in France this autumn, French supermarket chain Leclerc is launching an OTT version of its Réglo TV service.

The Mini-box Réglo TV provides access to 65 channels and video-on-demand offerings in two packages. The Initial pack includes 16 general interest channels, on top of the basic 25 free-to-air channels available on DTT, for €4.99. The box incudes a DVB-T tuner to receive the terrestrial services.

An Optimal bouquet provides access to a further 16 thematic channels for €12.99 and a transactional VoD service with 200 shows, films and series on offer each month. There are also various thematic bouquets available for between €1.50 and €12 a month or à la carte channels for between €0.50 and €20 a month, with a total of 65 channels available. There is no minimum subscription period for the service.

In addition to the Réglo TV Vidéoclub the box provides access to the VoD service of Filmo TV and the Disneytek service, independently of whichever bouquet users sign up to.

The box includes access to catch-up TV and allows users to view personal media on their TV screens.

Mini-box Réglo TV requires a minimum internet bandwidth of 2Mbps. The offering is targeted at internet users that are not eligible to receive full TV-over-ADSL services from the country’s main ISPs.

Leclerc’s OTT launch follows its launch last year of Réglo TV as a pay DTT offering in partnership with TF1 Distribution. This offered two prepaid mini-packages comprising Eurosport and news channel LCI, and Eurosport, LCI, Paris Première and TF6 respectively. Since that launch French digital-terrestrial pay TV has entered a period of serious decline, with commercial broadcasters TF1 and M6 petitioning to migrate LCI and Paris Prèmiere to free-to-air and TF6, a JV between the pair, set to shut down at the end of the year.