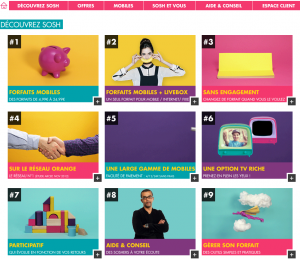 Orange France has reacted to rival Bouygues Telecom’s introduction of a low-cost fibre offering by using its low-cost subsidiary Sosh to launch a new low-cost quad-play offering including fibre-based internet.

From July 3, Sosh will offer a combination of Orange’s Livebox plus mobile, with internet speeds of up to 200Mbps downstream and 50Mbps upstream for the same price as its current €44.99 and €49.99 ADSL-based quad-play combinations and for €5 more than its current €29.99 and €34.99 packages.

Sosh customers not currently equipped with Livebox Play will have their receiver swapped out by a techician when they have fibre installed.

The move follows Bouygues’ launch of a €25.99 fibre offering last week. Until now, Sosh customers could only take ADSL or VDSL-based broadband. Sosh has about 2.1 million customers. Orange can currently offer fibre to about three million homes using the Sosh brand.

SFR and Free have yet to join the ultra-high speed quad-play price war.

Numericable’s owner, Patrick Drahi’s Luxembourg-based investment company Altice, last week raised €911 million by placing 17.9 million new ordinary shares, the proceeds of which will be used to finance the €529m cash payment to Carlyle and Cinven for their 14% stake in Numericable, as previously announced on April 7, with the balance being used to reduce net debt andfor general corporate purposes.

The Virgin Mobile acquisition comes after Drahi’s deal to acquire the much larger mobile and fixed operator SFR from Vivendi for an initial €13.5 billion and is part of his overall plan to use Numericable as a leading consolidator in the French fixed and mobile communications business.