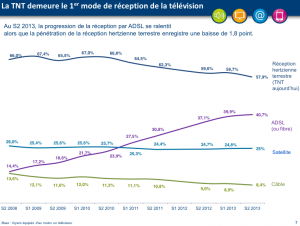 Over two in five French households – 40.7% – received TV via ADSL or fibre by the end of last year, according to the latest survey from media regulator the CSA. However, growth in IPTV has begun to level off, increasingly by only 0.8% in the previous six months.

Digital-terrestrial TV remained the primary mode of reception for French households at the end of the fourth quarter, with 57.9% receiving a DTT signal, down from 59.7% in June. Satellite reception was stable at 25%, while cable fell by half a point to 8.4%.

About three homes in 10 had more than one form of TV reception, with only one in three only receiving DTT. About one in five only received IPTV while 14.1% received a combination of IPTV and DTT.

About 82.8% of French homes had a TV capable of playing HD images, while 39.5% were equipped with HD set-tops and 77.2% were equipped to receive HD via DTT.

In terms of quality, French viewers reported that images more frequently froze on IPTV services, while interruptions to reception were more frequent on DTT.