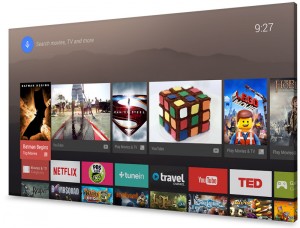 Google promised “entertainment tailored for you” with the new operating system, which will support services like Google Play and YouTube, Android games and apps from companies like Netflix.

Google Cast technology, already used by Google in its Chromecast TV dongle, will be included so that users can select content on their mobile or tablet to watch on the big screen.

Content will also sync across devices so that users can finish watching on a different screen, while Google is also including voice control.

Sony, Sharp and TP Vision will be among the first manufacturers to deploy Android TV in new sets, starting from next year and the OS will also work in set-tops and gaming devices.

However, it follows its more promising launch last year of its Chromecast HDMI streaming device, which Google says has now sold “millions” of units.