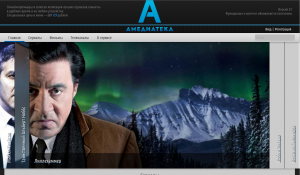 Amedia has already introduced some premium Russian content, and plans to do more, said Apokov. He said the company does not have the resources to produce its own premium content for its channels, but will acquire series from other providers and will focus on introducing an advanced windowing system for the Russian market.

“We think a similar model could really work with TV series. If you have content that people will pay for it’s better to sell to us to have the content on pay TV for a month and then go to free TV. Russia produces 3,000 hours of TV series each year, with about 100 theatrical titles worth discussing.”

He said the biggest TV series in Russia has a budget of about US$600,000 per hour, lower than the cost of imported US content but still significant. “We can provider our viewers with decent product,” he said. “Ten years ago we didn’t have a single Russian TV series on air. Today we mostly don’t have foreign series on prime time and this is dictated by the market. It has a lower budget but it is closer to the [life of the] audience so it works.”

Apokov said Amedia had done relatively little advertising for its service. “What we did was some joint promos with cable and satellite providers. With Akado we achieved 12% penetration for our premium channel. To reach breakeven we need about 5% of the current pay TV audience in Russia.”

Apokov said the internet TV service would remain a niche offering within the wider premium offering. “We think the proportion of online viewership is not more than 10-20% of the total viewership,” he said.

Apokov said Amedia would focus on differentiating its offering through its brand and the fact that it had created a new type of premium channel for the Russian market.

“Ff we remain number one in our niche the key is to keep our brand. Adding Russian content means we have to be cautious not to disturb the impression of the brand that already exists. It has to match the type of creativity we see in HBO content,” he said. “There is an art and science of keeping this brand. We will remain a niche channel. It may be a risky strategy but we think it’s the right one.”