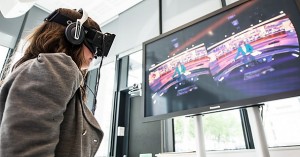 The BBC has started to trial immersive video experiences in its first experiments with virtual reality technology.

Discussing the move, BBC Future Media’s head of business development Cyrus Saihan said the BBC had tested the Oculus Rift virtual reality headset to see if viewers could experience a programme “as if they were actually there in person.”

“With Facebook’s US$2bn purchase of Oculus Rift some big bets are now being made on the future of virtual reality. We have started to test out its potential and working with a small production team in London called Visualise, have done a few basic pilots,” said Saihan.

One experiment the BBC conducted included using a 360-degree camera to film its newsroom, live editing gallery and news presenter Fiona Bruce in the studio – stitching together the images to create a virtual reality experience that can be viewed on an Oculus Rift device.

“It is hard to describe what it is like to wear an Oculus Rift, but once you put it on, it feels as if you have been transported to a different place,” said Saihan.

Though Saihan admitted it is still “very early days” for this technology, he said “virtual reality has the potential to be the next generation platform.”