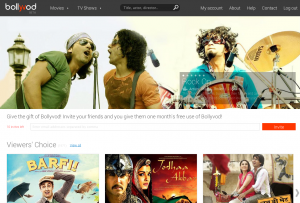 The service has gone live in the US, with worldwide launches to follow in the coming months.

Voddler said it has secured more than 100,000 hours of content for Bollyvod – including the latest movies and shows from Bollywood’s leading studios – and claims it is aiming at global audience of some 700 million people.

“In many countries, Bollywood fans are a niche audience. On a global scale, though, they are a mass market crying out for Indian cinema and TV-shows,” said Voddler CEO Marcus Bäcklund.

“Bollyvod gives people exactly what they want: good content truly anywhere and anytime, with an extraordinary quality of service. In doing this, Bollywood crushes piracy. So while Hollywood struggles with its digital transition, Bollywood will generate new revenue and make piracy streaming irrelevant, thanks to one global disruptive move.”

Voddler said it will deliver the Bollywood content using its peer-to-peer cloud Vnet, which is designed to allow content owners to reach large audiences, even in low bandwidth regions.