Mobiles and tablets account for 21% of online video views 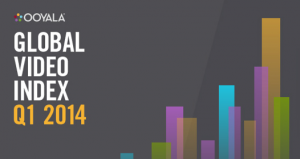 The Ooyala Q1 2014 Global Video Index said there had been a “year-over-year increase of 532% since 2012,” with mobile plays in Europe and Latin America outpacing those in North America, as a percentage of all online video plays.

The report found that while the majority of videos viewed on tablets were short-form content, 48% of overall viewing time was spent watching videos of 30 minutes or more. In total, tablet viewers spent 77% of their watching videos of at least ten minutes in length, said Ooyala.

“The statistics in our Global Video Index continue to affirm our belief that mobile is in large part the future of video and TV consumption. We see the acceleration of mobile video consumption happening globally, as consumers in every region adopt mobile and tablet video faster, and interact with it longer,” said Jay Fulcher, chief executive officer at Ooyala.