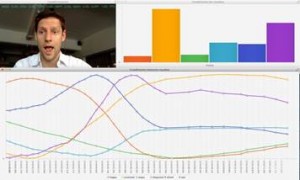 CrowdEmotion, which uses facial coding web cams to capture emotions, was one of the six startups to secure backing from BBCWW this year as part of its Labs scheme.

The new business partnership has seen BBCWW start a pilot scheme with 200 participants in the UK, which will use CrowdEmotion’s facial expression technology to measure happiness, surprise, anger, fear, disgust and sadness.

A second wave of research will take place in Russia and Australia, followed by a third set of studies in six other international markets, with further monthly global research studies also in the pipeline, according to Worldwide.

“CrowdEmotion’s ability to capture, record and quantify our audience’s emotional attachment and engagement to our TV shows, places BBC Worldwide at the forefront of global audience research and ultimately determines what our fans love to watch.”

CrowdEmotion were one of six firms to be picked by BBCWW to be part of its Labs starup scheme, which is now in its third year. The idea is to offer new companies guidance from industry experts and mentors from around the BBC, securing commercial partnerships without taking an equity state in the companies.