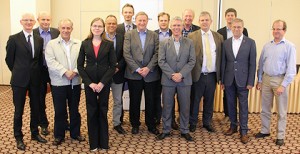 The European Broadcasting Union (EBU) has elected a new team to lead its technology initiatives.

Egon Verharen, research and development manager at Dutch public broadcaster NPO, has been named as the new chairman of the EBU technical committee. Klaus Illgner-Fehns, managing director of IRT, the technology centre for German-speaking members of the EBU has been named as vice-chairman, as has Andy Bower, head of external relations at BBC Research and Development.

Other new committee members include the first woman to join the body, Galina Federova, deputy director of the distribution network department at Russia’s RTR.

Elections to the committee take place every two years.

“We have a great new team, ready to pick up the baton of its predecessors,” said Simon Fell, EBU director of technology and innovation and secretary of the technical committee. “We have a new workplan which will speed us forward in the next twelve months. We have very exciting new challenges such as the development of Agile Software Collaboration, and of course, continuing our case for maintaining adequate spectrum for broadcasting.”