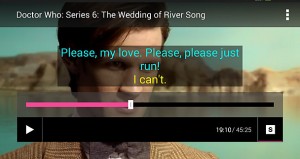 The BBC has launched a new version of its Media Player, the application it launched two years ago as a response to Adobe’s decision to remove support for the Flash Player plug-in, on the Google Play Store and Amazon Store.

The new version of the BBC Media Player brings adaptive bit-rate streaming of BBC content to Android users for the first time, delivering the same range of features as those already available to computer users.

Other features launched on the new version ahead of the World Cup and Commonwealth Games include the ability to rewind back to the beginning of live event coverage and the option to jump to the beginning of defined segments within an event, such as the second half of a football game, according to Cathy Bartlett, senior product manager, media playout product, BBC Future Media.

Bartlett said in a blog posting that the BBC would work on rolling out these features to its other apps, including BBC iPlayer, over the next few months.

Bartlett said that the BBC’s next goal is to introduce adaptive bit-rate streaming for all its catch-up programming. Ultimately, she said, the BBC aims to enable video playback without the need to launch a separate application.

Media Player was launched in 2012 as a way of securely playing BBC content on Android devices, beginning with the mobile version of BBC iPlayer, following Adobe’s decision to withdraw support for the Flash Player on mobile browsers.