BBC to trial UHD during the World Cup 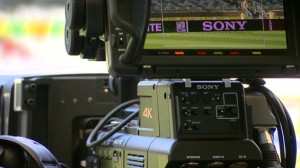 The BBC has announced plans to run a series of Ultra High Definition, 4K, broadcast trials during the football World Cup later this month.

The closed trials will be conducted during all three games that are set to be produced in UHD by FIFA TV from the Maracanã stadium in Rio de Janeiro – one match from the last 16, a quarter final match and the final.

The BBC said the trial will mark the first time that live UHD coverage will be delivered simultaneously over digital terrestrial television (DTT) and internet protocol (IP) technologies ‘to the home’ and will help the corporation to better understand the latest UHD distribution technologies and standards and inform future developments and best practices.

“The live UHD streams will be transported from Brazil by satellite to the UK where they will be decoded and distributed, via existing broadcast and super-fast broadband infrastructure, to a number of compatible consumer UHD TV sets in selected R&D facilities,” said the BBC.

The trial will examine the use of High Efficiency Video Coding (HEVC) for distribution over both DTT and over the top IP networks, and will also test the use of MPEG-DASH adaptive bitrate technology for high quality video delivery over IP networks.

“BBC R&D has an outstanding track record as a catalyst for bringing the industry together and delivering the future of television to audiences. These trials are an excellent example of that tradition as a major technical achievement, such as distributing UHD TV over DTT and IP simultaneously from Rio, can only be made possible by close collaboration with a range of organisations,” said Matthew Postgate, controller, BBC R&D.

“The trials will prove hugely valuable in furthering our understanding of UHD technology, and potential distribution models for the future, as well providing real benefits for licence fee payers in the near-term.”