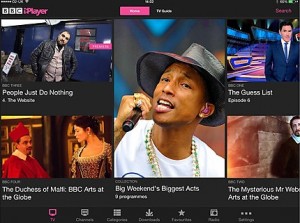 The BBC has taken the first step in “re-defining” the iPlayer experience on mobiles and tablets, launching an update for the Android and iOS app versions of its catch-up TV service.

The new release is designed to bring the mobile apps in line with the recent revamp to the iPlayer, which was introduced first on responsive web and connected TVs in a bid to make the iPlayer experience consistent across different devices.

The updated mobile apps will present users with a selection of featured programmes that have been chosen by the BBC, as well as a group of most popular shows. The new “picture lead interface” will also include the new ‘collections’ feature, which groups programmes by theme or season.

Dedicated category and channels pages have also been added to the apps that include programme information as well as live playback options, with more updates planned.

“We want to introduce a new navigation menu that is consistent across both platforms, a quicker journey to improved playback, features such as live rewind and continuous play, improved ability to favourite programmes as well as making BBC iPlayer a more personal experience with cross platform playback and better, more relevant recommendations,” said senior product manager for BBC iPlayer, Chris Tangye.

He added that the BBC decided to “evolve” its existing iPlayer apps rather than focus on a completely new redesign, as this would have likely taken until 2015.

“The new iPlayer ‘journey’ on mobile apps started after work began on TV or responsive web. In some respects we were in a more fortunate position; the TV and web versions of BBC iPlayer were last refreshed in 2011 and 2010 respectively and were in need of a major overhaul, whereas on mobile we have been adding updates throughout the last 18 months and the codebase has remained solid,” said Tangye.