Binge viewing enjoyed by 80% of viewers 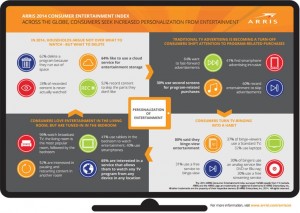 Broadcast TV remains “the staple of in-home entertainment,” though 80% of people now admit to ‘binge viewing’ TV content, according to new research by technology provider Arris.

The Arris Consumer Entertainment Index claimed that 14% of those surveyed admitted to binge viewing – watching multiple episodes of a TV show in a single sitting – “at least” once a day. Among 25 to 34 year-olds, 18% said that they binge on entertainment content once a week.

Meanwhile, the most popular way to binge view content was to download via a free catch-up service (31%) or via DVD/Blu-ray (31%), closely followed by a free, streamed catch-up service.

Overall, broadcast TV was found to have a “nearly universal 96% penetration rate” with the living room still the most popular room for viewing TV.

However, thanks to new devices, respondents were also found to be “branching out from the living room” with 41% of tablet owners watching content on their tablet in the bedroom, and 22% in the kitchen.

“Around half of smartphone owners watch TV on their smartphone for at least a few minutes a week. This is also the case for around six out of ten tablet owners,” said Arris.

The Consumer Entertainment Index is a global study surveying 10,500 respondents across 19 countries on their consumer viewing habits.