Netflix teams up with Vodafone 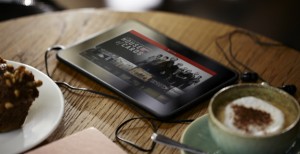 Telco Vodafone has teamed with Netflix to offer its 4G customers a free six-month subscription to the streaming service.

The offer applies to Vodafone’s 4G ‘Red’ customers with a monthly contract costing over £26 (€32). They can access Netflix on their 4G handsets and other connected devices.

The promotion, which will be available from July, coincides with Vodafone’s offer to the same group of 4G subs of free mobile internet access (within the UK) for three months.

Cindy Rose, formerly executive director of digital entertainment at UK MSO Virgin Media and now consumer director, Vodafone UK, said: With 4G, speed is just the start: it’s what you can do with it that’s really exciting. We’re delighted to be partnering with Netflix so that our Red 4G customers can enjoy their favourite TV programmes and films when out and about.”

Bill Holmes, head of business development at Netflix, added: “Netflix is all about giving people the freedom to watch what they want to watch, when they’d like to watch it, on whatever device. This partnership with Vodafone further enhances that freedom to watch while on the go.”

Last October Netflix is teamed up with Nokia to give UK buyers of the phone maker’s latest smartphones free access to Netflix. The offer, which was available via Vodafone, gave new customers who take a contract for Nokia’s September-released Lumia 1020 Windows Phone a free 12-month subscription to Netflix.

Virgin Media also offered a free six-month Netflix subscription to customers who signed up to Virgin Media’s Premiere or VIP Collection triple-play packages. The promotion last November coincided with the launch of a Netflix app that made the on-demand service available to Virgin Media’s TiVo customers.