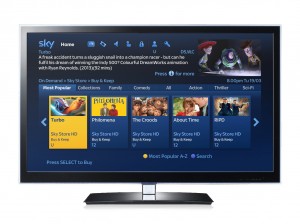 Buy & Keep provides the ability to purchase digital copies of HD movies along with the original DVD sent by post.
The service offers brand new movies at the same time as their DVD release, with many titles available for digital early release, according to Sky.

Sky unveiled details of the service at the beginning of the month.

Titles at launch include Warner Bros’ The Hobbit: The Desolation of Smaug, Ben Stiller comedy The Secret Life of Walter Mitty, family animation Turbo and Richard Curtis romantic comedy About Time, as well as other titles from 20th Century Fox and NBCUniversal.

Forthcoming titles include The Wolf of Wall Street, Mandela and Lone Survivor.

The service will be further enhanced over the next year with customers being able to access the movies they’ve bought via tablets and smartphones, according to Sky. In the future, TV box sets will be available to buy and Sky Store Buy & Keep will become accessible to non-Sky subscribers with the Now TV Box, Roku and YouView boxes as well as via the Sky Store website.

“Buying movies straight from your sofa becomes even easier with Sky Store from today. Our customers love to watch their favourite movies again and again, and with ‘Buy & Keep’ they get the benefit of being able to watch in minutes with the HD digital download, as well as receiving the original DVD in the post,” said Nicola Bamford, director of Sky Store.